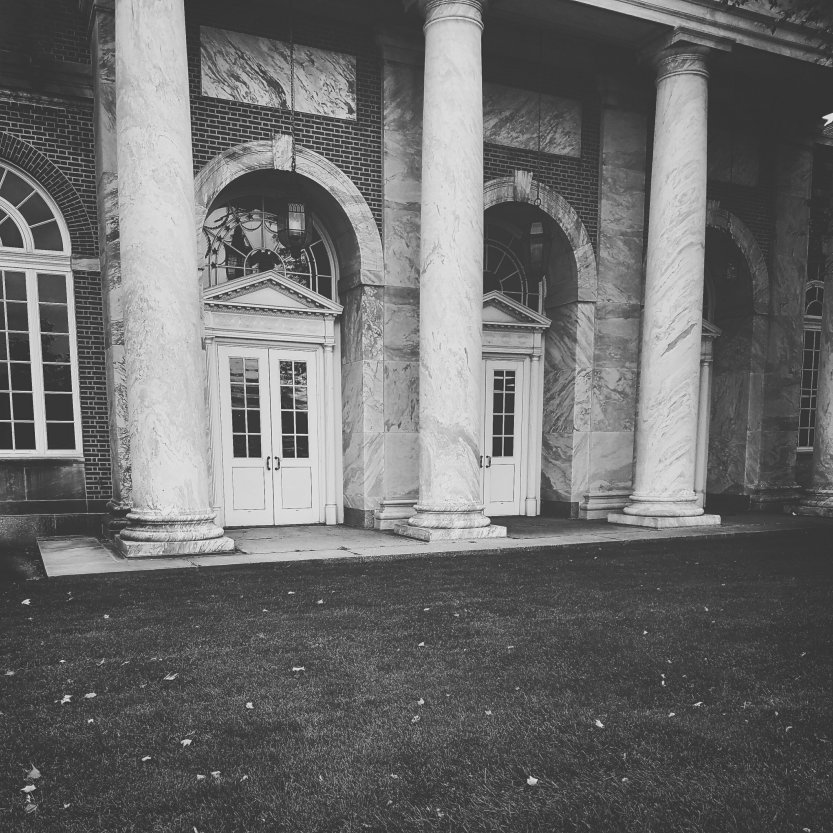 For just a few seconds, there’s no traffic on the main road I live on. Not quite 7am, with people’s body clocks confused over daylight savings time, there’s no one on the road. It rained last night, and there’s a slight drizzle at the moment, the only sound is of water dripping through the gutters. The sun isn’t even awake yet, and for a second as I stand on my back deck, it’s bliss. No city noise. No sirens or radios, no squeal of tires. Quiet and rain water. I’m alone with my cigarette smoke. For a second I’m not in the middle of a busy town, and my soul smiles.

Chase is with his dad, and Matt is asleep. His brother JD was over for the evening but that child sleeps, too. Grandma is awake, enjoying her coffee and morning news. I can quietly contemplate yesterday’s eventful day, and the hectic one in front of me. I wasn’t pleased that my body woke me up just before 6am, and I rolled over and covered my head to attempt to get in a little more sleep. Chase’s clock went off a few minutes later – a ninja turtle clock that makes ninja fighting noises on the hour every hour there’s light in the room – and I knew it was a pointless endeavor. And truth be told, I got more sleep than normal, clocking in at almost 9 full hours. After a full day walking The Henry Ford Museum and taking the tour at the Ford plant, driving 3 hours round trip, and a couple beers at the end of the night I could barely keep my eyes open when I got home at 9pm, and was out for the count before 11pm.

It was a good day.

Thursday I came across the event on Facebook,  $5 days at Henry Ford. As a child, the Henry Ford was a part of our field trip list, with adjoining Greenfield Village. I believe I was in 3rd grade when we went and I don’t remember a whole lot about it, but I do remember that I enjoyed it immensely. So when the event popped up on Facebook, I knew I was taking Matt.

Friday, Matt twisted his ankle jumping over a cheeseburger at the high school football game. Yes, you read that right. Of all things to do. . . He was trying to come down the stands and saw the cheeseburger and for whatever reason decided instead of stepping over the random food item, he would jump over it. And landed wrong and twisted his ankle. I told him to ice it and elevate it, apologized to him for his inheritance of my luck and grace, and hoped it wouldn’t get in the way of our plans the next day.

We left later than I anticipated, around 1045am. While I was looking forward to the trip, I was nervous. First and foremost, I don’t drive expressways unless it is unavoidable or a life and death situation. Yes. I drive at excessive speeds on regular roadways, but I won’t drive on a road made for excessive speeds. I never claimed to understand my thought process. Anyway, luckily I had found a route that didn’t require expressway driving. I also am not a fan of driving in areas I’m not familiar with, and I had never driven this particular part of Michigan. I felt extremely anxious, but I refused to let that get in the way of an adventure. I put our destination into Google Maps, put on some music, and commenced driving. Matt sat in the backseat, involved in whatever was on his phone, and I navigated our route. I knew it was pretty much a straight shot, so I put my vehicle on cruise at 60mph, to avoid my lead foot from getting me in trouble out of state.

Soon we began to encounter towns, and Matt came out of his internet world to look around and read signs. It’s just something we do on road trips, look at businesses and signs and make jokes about the meaning behind them. It’s a fun game, and he always makes me laugh with his interpretations and impersonations. We’ve done this for years, since I took him through the Irish Hills on a trip to see dad while he was in Ann Arbor. As we neared our destination, traffic got intense, and the route took on a feel of an expressway. Tense and nervous, I followed the maps instructions, and we safely made it to our intended destination. There was a line outside, and parking was ridiculous. Matt is my hermit and seeing how busy and crowded it was going to be, he began to grumble and moan, mentioned how his ankle was hurting him to try and get out of going.

I drove an hour and twenty minutes, over came several different reasons for anxiety, and I wanted to see what I came to see. He wasn’t gonna get out of it. We made our way across the parking lot, him exaggerating a limp to try and gain some pity from me.

“Bet they have wheelchair rentals,” I said to him. He looked at me, and it was plain from his expression he didn’t think for one second that either A. They actually did or B. That I actually would.

He talked me out of the wheelchair, his ankle magically better as soon as he saw that they did have them available and that I was dead was serious about pushing him around in one. And we spent the next three hours, not nearly long enough, exploring the museum, agreeing to come back for Greenfield Village another day.

I wasn’t able to snag pictures of everything, there was so much and we were so engrossed I forgot my phone was in my pocket half the time. Matt did pose for a few though, giving me his “I’m humoring my mother so she’ll leave me alone” smile. Beggars can’t be choosers.

As always, it was awesome to watch the boy feeding that big brain of his. “Mom! Look at that!” And “did you know that. . .” And he’d spout off some random fact about a president or whatever display we were looking at.

I’ve always enjoyed doing these things with him. He makes it a lot of fun, and we bond over our love of learning. And what’s awesome is that while Chase isn’t old enough to do these things yet, he will be soon, and I get to do it all over again. I’ll get to see these places and do these things and see them through two sets of eyes. Talk about blessed.

We ate at an overly expensive diner which had been moved inside of the museum, and made our way to the pick up spot for the Ford Rouge factory tour.

We weren’t allowed to take photos inside, but it definitely was cool to see how the vehicles were made and find out the history behind the plant. And we got to see how the new F150 was made, and let me just say that I am in love.

We headed back to the museum and hit a couple places on the map that we wanted to see. 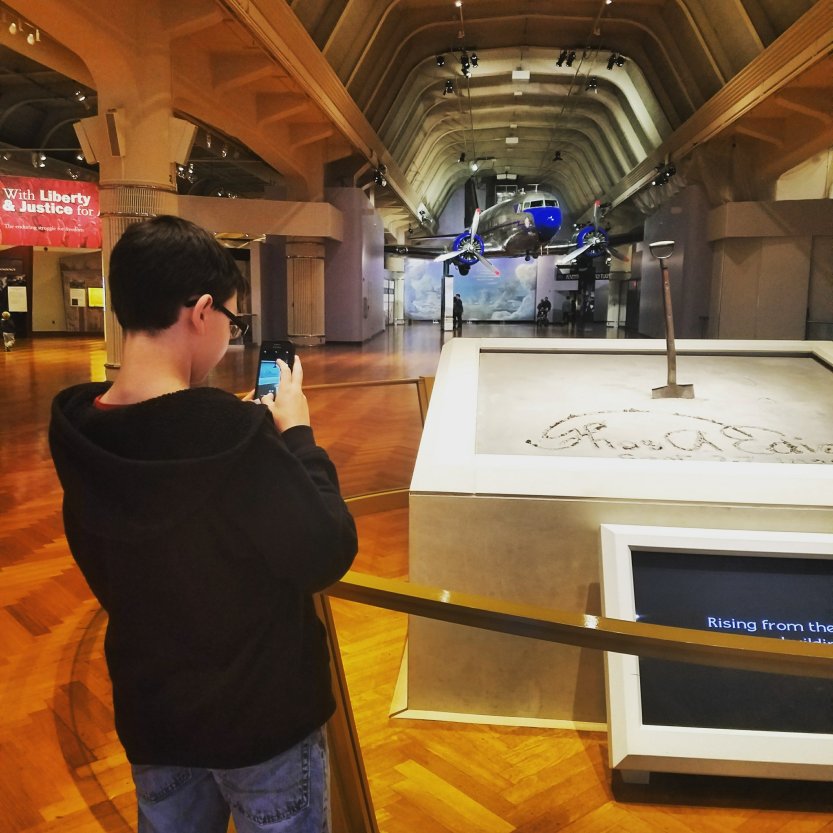 My weather app kept dinging at me that it was going to rain, so we decided to leave and try to beat the storm. We made it to the car just in time, and I spent an hour and twenty minutes driving back home in a downpour, following first every idiot in the state of Michigan, and then finding the ones in Ohio, as well.

I met up with an old friend for a couple drinks after dropping Matt at home, and while I was disappointed that the bar didn’t carry my drink of choice, an Angry Orchard hit the spot – and then a second -and an hour and a half was gone in the blink of an eye as we caught up on the last several years. Had I not had to work at 10am I would have been content to stay there and chat with him and drink more, but responsibility called. I picked Matt up some dinner, and knew as I took off my shoes that I was done for. I forced myself into some yoga, knowing my hips and ankles would thank me in the morning. My fit bit had logged over 10,000 steps for the day, and normally I barely get in 7,000. I had a cute little buzz from the rare alcohol consumption that hit just as I began to go through the poses, and the combination completely relaxed me. Lights out before even 11pm.

6am and *ping* what in the actual fuck, it’s Sunday, I should be sleeping. . . Instead I got up and yoga’d again to remove the stiffness and commenced with my day, working and utilizing Wal-Mart’s online grocery shopping/free pickup. I paid Aaron’s bills and mailed them, got gas, and came home to cook my ass off, as rain thundered from the sky and soaked my little part of the world. Pumpkin cake in the oven and corn chowder simmering on the stove, I thought to myself that I could host a cooking show if not for my bursts of swearing when I dropped something or dripped something or almost cut myself dicing onions or almost burned myself checking the cakes. Everything turned out scrumptious, and now I sit here letting my food settle and my thoughts center, happy with all that my weekend was. Yesterday I was grateful for adventure; doing things that are out of my comfort zone. Driving to a new place for the sake of feeding my child’s brain, and meeting a guy at a bar who I haven’t seen in years for the sake of feeding my curiosity both definitely qualify. Today I’m grateful for my cooking abilities. Because that food hit the spot for sure.

It’s time I commence adulting however and get my hooligans ready for the week ahead. Happy weekend!