First off, let me just say a new set of brakes, rotors, and an oil change did Clarice (and my peace of mind) a world of good. She still needs some work, as always, but we’re headed in the right direction. I hate putting money into my vehicles and generally it results in me being up shit creek without a vehicle because I’m such a procrastinator when it comes to vehicle maintenance. If it takes more than a quart of oil or gas or a tire fill up, it gets put off. In other words, if it requires more than $30 or the aide of someone else it doesn’t get done until I have no choice. Slowly and painfully I’m learning the error of my ways, haha.

My intentions for today were to get up and kick today’s ass, you know, my usual Saturday routine. The migraine I woke up with had other plans, however. I’m beginning to think these headaches are not caffeine related, but stress. I’ve never been one to have stress headaches, but age changes things. I downed water and Motrin and did my yoga, did the hot shower thing. I wrote my morning blog post, and drank my coffee. It felt like a vice was squeezing my head though. I craved sleep, but my philosophy is I can sleep when I’m dead. So I called and found out when I was getting my car fixed, then called my aunt to let her know I wouldn’t be making the party, unfortunately. I had been looking forward to seeing my family. I could have put Clarice off another week, but the safety of my children took precedence. I had about 3 hours to kill, so errands commenced.

Car wash, bank, pay bills, get the bitches tires filled, grocery store. This damn Ohio weather is a trip. 40s in the morning, high 70s in the afternoons. My poor tires were like ummm, the fuck? While I watched a handsome young gentleman attend to my tires, (there is a God. This guy was proof!) Aaron called me with some fantastically good news. My day was off to a good start, despite the rough beginning.

At the grocery store things went south again, as I struggled to read my list through my blinding headache and keep an eye on my crazy little monkey child. I forgot a pen and kept back tracking through the store for things I had forgotten. I gave up about halfway through, unable to concentrate anymore. The place was packed and Chase was on my nerves and I was due 45 minutes away in half an hour. I grabbed an energy drink, desperate to quiet my throbbing head, and checked out half of my grocery list. The rest would have to wait. I downed the energy drink in the ten minute drive home along with some Excedrin. Excedrin never works for me, but I didn’t feel okay with taking more Motrin, so I crossed my fingers that the ridiculous amount of caffeine and the pain killer would do the trick.  I unloaded the groceries, putting away the cold stuff, and headed out of town to tend to my needy vehicle.

The gentleman that fixed my car is actually Matt’s great uncle, proof that once again family isn’t always blood. I love going out to him and his wife’s home and I don’t make the trip often enough. It’s out in the country, and quiet save the train that runs by their home. I chatted with him for awhile while he disassembled my passenger side wheel, watching what he was doing. Vehicle maintenance has always intrigued me, despite my lack of willingness to have it done. It interests me to see how things work together to make a vehicle go down the road. Chase hopped around, playing on the tire and getting grease on his hands and face somehow. He also for whatever reason had taken off his shoes, so now I either need to throw his socks away or try and get grease out of those. Boys. Oy vey. 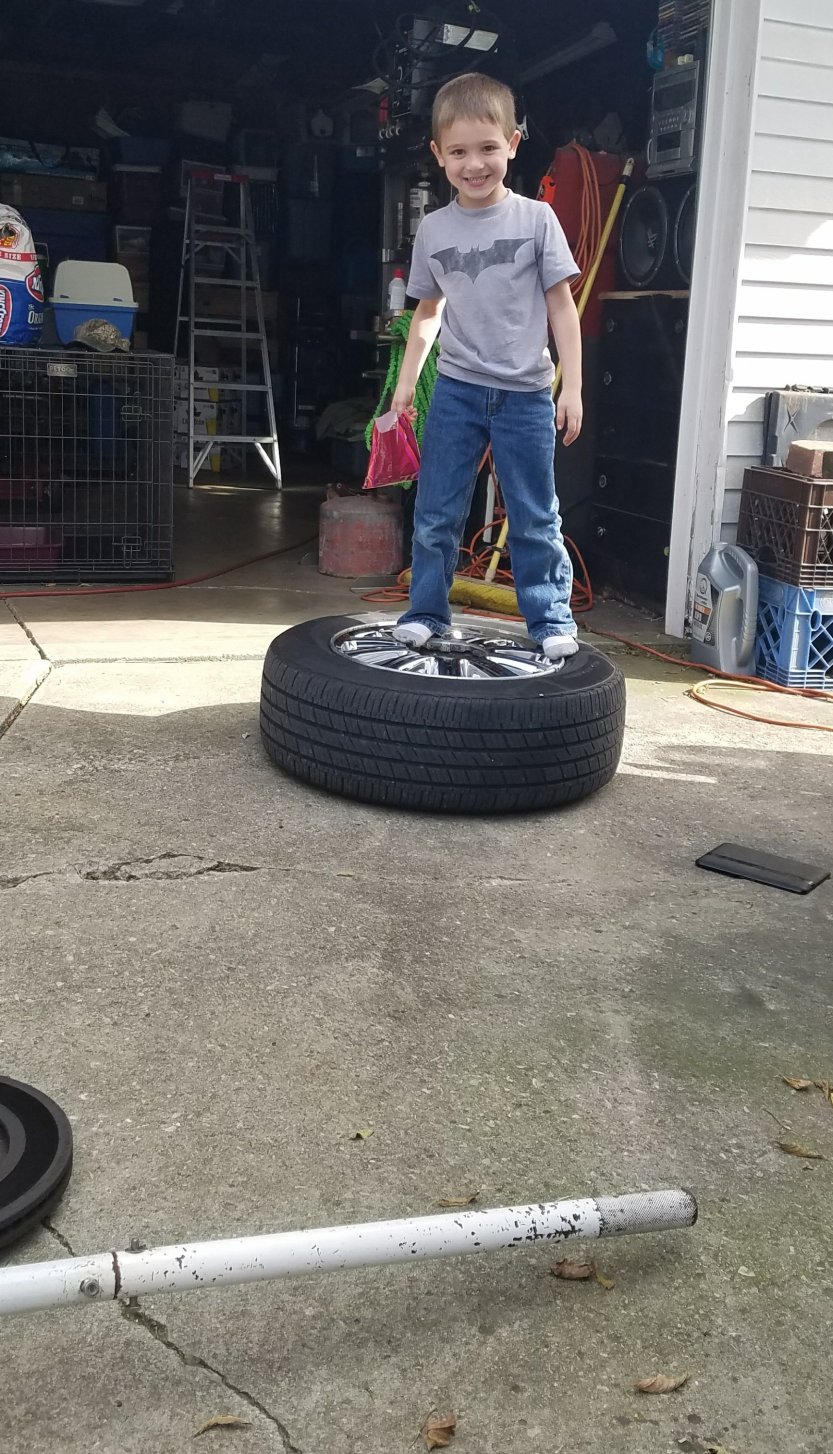 Soon, his wife came out and we drank coffee and chatted between Chase’s insistence that she pay attention to him instead of having adult conversation with me. Number one, there’s nothing better than a cup of coffee and good conversation. Number two, I love watching Chase interact with people who are important to me. Both last night and today I got to watch him engage in conversations with people that I love and enjoy being around. It’s like I get to see him through someone else’s eyes, and he really is an amazing child that captivates whoever he speaks to. You can’t help but to love him and give him your undivided attention. Matt was much the same at his age, even though he’s a hermit now. If nothing else, I’m blessed with absolutely amazing children. I can’t forget that I have some other very wonderful people in my life as well. They make it very easy to forget the heartless ones that have crossed my path that I’ve been giving entirely too much of myself to.

After getting the look and a stern voiced suggestion that I change my oil more frequently, (which I fully accept that I need to be more attentive to this vehicle and said as much) and a list of other parts needed, Chase and I headed home. Matt’s other younger brother was over and while Matt opted to continue with his hermit ways, JD jumped at the chance to go to a pumpkin patch with Chase and me. We piled into the car and went and enjoyed a corn maze, donuts and cider.

And that, my friends, has been my day. My head still hurts, and has me nauseated. All the caffeine will keep me awake for awhile I have a feeling though. I am down to two drafts in my WordPress draft folder, and have been toying with doing an album of the week post. First a hot bath is in order though I think. Happy Saturday!