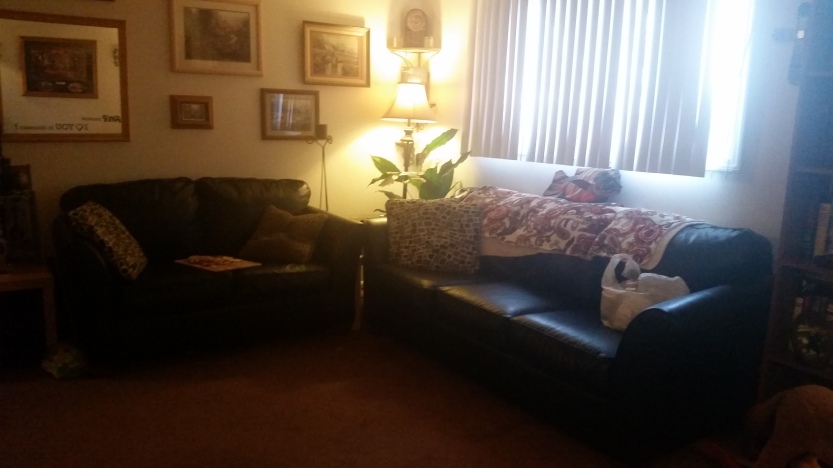 I remember living in Matt’s Uncle’s basement when Matt was a newborn baby, me on a blow up mattress and him in his pack and play; I remember sleeping similarly on Grandma’s apartment floor, only this time it was Chase in a pack and play.  I remember apartment living and sharing laundry facilities with the other tenants, smelling marijuana in the hallway, and having to explain to a young Matthew B. about the smell.  I remember my kids not being able to go outside and play because the other kids in the apartment complex were utter hooligans and I don’t trust adults as far as I can pick them up and throw them.  I remember small garden plots in front of my apartment windows to satiate my ever present need to get my hands dirty, and cleaning my car off in the mornings after it snowed with a broom because I’m too short to reach the top and I can’t stand snow flying off the top of a vehicle.

I remembered all of this as I sat staring at the bookshelf across from my bed and remembered the joy of moving into this home after coming through all the aforementioned.  I remembered strategically placing my books on the shelves along with mementos and décor.  It was the first thing I did once we were moved in, because my bookshelf being set up signifies that I am indeed home – wherever home may be.  It holds ribbons from my parents funerals and sand art that the boys made for me through the years at the fair back home; The globe I bought for myself while pregnant with Matthew – I found myself moving back home once I was pregnant, and after I found a job it was the first thing I bought –  because I wanted to teach the child growing inside of me how to appreciate something so beautiful, and I wanted to raise a child who loved to learn.  The Thomas Kinkade plate that hung over the sink in the kitchen at dads, that I stared at while I did the dishes each evening growing up now has a place on my bookshelf; a plate that a dear friend gave me for my birthday one year from a Gone With the Wind collection; my dad’s books and my mom’s books and books that I have purchased and also have been purchased for me as gifts. . . artwork and photos of the kids and a flower a family friend made for the passing of a relative, book ends with globes and maracas that I found at garage sales that caught my eye to honor the learning my parents instilled in me and my Mexican heritage . . . my bookshelf is my heart in physical form.

And I realized as I stood staring at it that I encompassed on my bookshelf what I think home should feel like in the display of books and random items scattered on its shelves; my bookshelf is a cluttered conglomeration of the things and people I love, as is my home, and as were the homes of my parents.

I have come a fuck of a long way from the trailers I grew up in, from the basement and apartment floors I’ve slept on, from the apartments I’ve shared with my children.  I have fought tooth and nail to be able to say I live in a house, and there is permanence in our living arrangements – even if I’m not to the point where I own the home.  I have a large, if not unruly garden.  I don’t have to walk through hallways smelling of other people’s cooking and other odors.  No hooligans to influence my own unless I invite them into my yard.  There’s a garage to park Scarlett in. I couldn’t have gotten here without help, and I think even now I would struggle without Grandma to share the bills with.  But the fact remains – we got where I wanted us to get.  I was able to move my children into a home with a yard of their own, and I am insanely proud of this.  I moved to Toledo with nothing to my name.  I have unfortunately had to drag my kids through more moves than I wanted to – but I can say that they’ve never had to change school districts – I’ve fought to at least keep them near the teachers and friends they were familiar with.  And the amount of moving we’ve done isn’t the eighteen different homes that I endured as a child.  Twice I have had to start our lives from scratch due in part to my own stubbornness and in part to failed relationships – you live, and you learn.  Regardless, I have worked us up to this point.  I have worked to get into a home that I can call mine, and short of the landlord selling the place, no one can take it from us.  I am secure here.  I have achieved the physical security I lacked in my life as a child, as well as maintaining the feeling of home that my parents showed to me.

My biggest battle was when we moved into our last apartment.  It was after Chase’s dad and I had separated.  A big part of the predicament that I found us in was due to my own stubbornness – while he offered to help in many ways, I am ever the independent one.  I had opted to move with him into a house together, I had opted to sell most of my own belongings since we were combining two households.  And when we split, I refused to stay in the house, and I refused to accept his offers to help with various furniture pieces to get me started in our new apartment.  Instead, I started our new home from scratch, finding what we needed at garage sales and buying other items from friends.

As I built our home from the ground up so to speak, I promised myself I wouldn’t put my kids through this again.  Regardless of my stubbornness, my foolishness had gotten us here.  Never again would I put the stability of our lives at risk.  I would maintain my own home, with my own things – period, point blank.

We lived in that apartment for four years.  Slowly, the walls filled with art and the rooms with furniture and memories were made there.  There was a time when I wasn’t sure how I was going to keep the roof over our heads, but I managed it.  As I slowly made our apartment home and navigated us through life, I realized how far I had come.  I sat and wrote this post one evening as the boys lay in their beds:

Today I realized how much I love my home. Yes, it’s an apartment and despite it being a larger apartment it is a little small for the three of us. But I love it just the same. It’s taken me just over two years to get it how I want it and I’ve worked hard to get it the way I want it and to keep it. I think I am almost back to where I want to be in life. There have been setbacks and down falls and a lot of blood, sweat, tears and prayers since I moved in here. But also, a lot of very wonderful memories, triumphs, laughter, and joy.

Eventually I found that its walls were confining though, despite the memories.  I had two growing boys and a dog. No way we could reside in this two-bedroom apartment the rest of our lives.  I had finally found a job that I felt I could stay at, and felt my income was secure. I knew it was time to upgrade.  After discussing it with Grandma, we decided to combine our respective homes into one.

At eleven o’clock at night on December 30th, 2016, I removed the final items from the apartment that saw me through one of the most challenging yet rewarding parts of my life.  I sat on the floor of that empty apartment, and wrote the following post for Facebook:

I came to you with my five-month-old baby, my seven-year-old child, a dog, and little else. I had just started a new job two months prior and was very uncertain how well we were going to make ends meet. But I was determined to make a home for us out of this place.

These walls have seen that five-month-old and seven-year-old to age four and age eleven. They have seen tears, and quarrels. Four jobs, three cars, shut off notices. They have seen me on the floor in the bathroom uncounted times hiding my fears and feelings of inadequacy from my children’s eyes. They witnessed the pain and kept me from collapsing from the shock of losing my foundation, my father.

But they have also seen Chase’s first steps. They have seen triumphs, laughter, joy, and play. There have been forts built here, and A+ projects. They have seen meals prepared and presents wrapped. Heard singing and music, kept us sheltered, and watched while we celebrated.

These fourish years have been a journey, for sure. Sad to see you so empty, dear apartment, but eager to move on to the next chapter.

I sat here this evening pouring through pictures and videos from those four years in that apartment, laughing and smiling at the memories – a little toddler Chaser telling his Momma he loved her, and Matthew B. the same age as Chase is now, telling silly jokes. I don’t remember the specific struggles so much as I remember the laughter and the good times. And that’s what I’m talking about here, folks. If I haven’t said it enough, I’ll say it again – home is where the heart is.

I’ll leave this here for now, and conclude tomorrow with the final installment in this series – the adventures of finding and living in the home we are in currently.